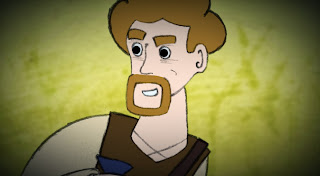 I've managed to get several shots done since the last update, this still is from one of them. My tutor warned me early on that he felt that shading the characters would be near impossible to get finished in time. Until I have everything else finished and coloured, the only things I will shade are the skeletons, and the sorcerer's emerald. The skeletons would be a totally flat colour otherwise, and the emerald needs to appear shiny and translucent.

He was unsure about my pipeline; that with photoshop I would have to render the colour separately from the line, use track mattes or clipping masks, and that rendering as png sequence wouldn't quite work. I did a little research. Since then I'm using a black solid under the line-art layer set to Luma Inverted.

The colour layer problem had me stumped for a while. I rendered as pngs, to test the theory. Black rectangles appeared behind every frame. Saving frames as pngs individually worked, but was time-consuming and I'd have to re-time it all in After Effects. Rendering it with a bright green background, and keying it out again was a pain. It worked, but was needlessly difficult to fine-tune the edges. I considered colouring in vectors to avoid the colour-blending of pixels, but decided instead to investigate the rendering panel. I found setting the Alpha Channel to Straight - Unmatted got rid of the black boxes. By that point I already had a few shots done, and had to fix them all to get rid of the mess of the green-screening. But that was a couple weeks back. I've got nine shots that I am happy with, and eight that are line-tested.

My tutor told me last week to have twenty finished by Thursday, to give me some breathing space in the next few weeks. Our deadline has been revealed as May first, and there's three weeks of Easter Holiday right before it, which will include my birthday and a trip to see distant relatives. I hope to get a few days worth of work done in that time.
Posted by Jamie Gibbs at 11:54

Jamie Gibbs
I am a student animator at Southampton Solent, in my third and final year.